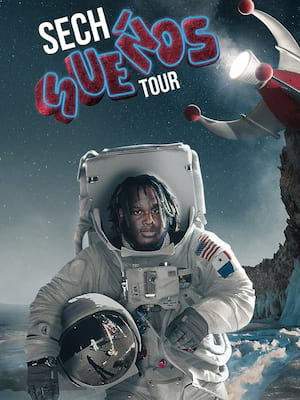 ...from humble beginnings to making music with some of the genres heaviest hitters, the dream Sech thought would never come to be has indeed become a reality.

In 2018, the release of the seductive subtropical smash hit single 'Little Miss Lonely' announced the arrival of Sech, Panamanian world music superstar. Following the single's success, he released his debut album Suenos in 2019, solidifying his chart-topping success not only in his own country but across the Globe. Don't miss the up and coming singer when he finally hits US shores on the Suenos 2020 North American tour.

Dusing the Latin American sonic stylings of reggaeton and dancehall with danceable urban beats, Sech began his journey to worldwide recognition as part of Panama's production collective El Combo de Oro before embarking on a solo career path. Propelled to stardom thanks to his smooth vocals, rhythmic and lyrical ingenuity, and a media-savvy online presence, this Panamanian Cinderella story is certainly one to watch.

Seen Sech? Loved it? Hated it?

Sound good to you? Share this page on social media and let your friends know about Sech at Big Night Live.