Sorry! You missed Boston Pops - An Evening with Penn and Teller at Boston Symphony Hall 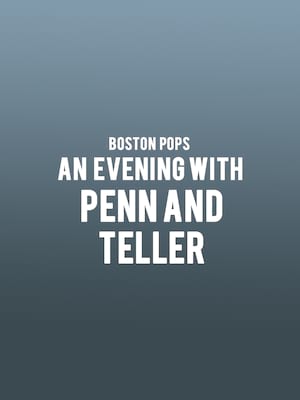 Boston Pops - An Evening with Penn and Teller

The gift of seeming up close and personal with an audience of thousands is a skill that Penn and Teller have been refining since the 1985 Off Broadway show that propelled them into stardom in New York, and it may be their cleverest talent.

Why See Boston Pops - An Evening with Penn and Teller?

Celebrating 25 years as the Boston Pops principal pops conductor, Keith Lockhart has put together a bumper season of special guests, soaring music and celebratory festivities. Kicking things off in high spirits, legendary comedy/magic duo Penn and Teller join Lockheart and the Pops 25 years after their first appearance together. Together the ensemble will dazzle and regale with humourous hijinks and a selection of Lockheart's favorite tunes.

For over 30 years, Penn and Teller have kept audiences entertained with their distinct brand of awe-inspiring illusions mixed with a classic buddy-comedy routine, keeping them at the very top of the magic profession.  Adept at updating worn out or archaic routines, such as bullet catching or the classic bag escape trick (their version involved a trash bag and lots of helium), the duo are constantly evolving their art form through live shows and television series including Showtime's Penn & Teller: Bull**it! which features the pair debunking mystics, fortune teller and conspiracy theorists.

Sound good to you? Share this page on social media and let your friends know about Boston Pops - An Evening with Penn and Teller at Boston Symphony Hall.