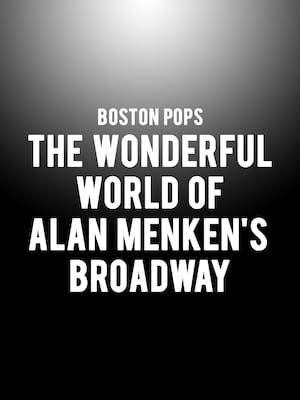 By writing the music for 20 years of hit movies, Menken help keep the genre front and center in the public consciousness, in an era when few other musicals were hits.

Chances are incredibly high that if you've recently watched a Disney film or musical and you're still humming the memorable melodies to yourself, that Alan Menken is to thank!  The man behind the most beloved scores and songs in the entertainment business is celebrated during Boston Pops' The Wonderful World Of Alan Menken's Broadway program, featuring the vocal talents of Broadway stars Sierra Boggess, Telly Leung and, Alton Fitzgerald, as well as the conducting talents of Kieth Lockhart.

Together the ensemble will perform some of Menken's most celebrated works from cherished feature films Beauty and the Beast, Hercules, and Tangled, amongst others. One of the most prolific Academy Award winners in history with a total of eight Oscars under his belt, Menken has also won 11 Grammys and a Tony for his work in animated films The Little Mermaid, Aladdin, Newsies and The Hunchback of Notre Dame amongst other Disney classics, as well as the original score of cult hit Little Shop Of Horrors.

Sound good to you? Share this page on social media and let your friends know about Boston Pops - The Wonderful World of Alan Menken's Broadway at Boston Symphony Hall.