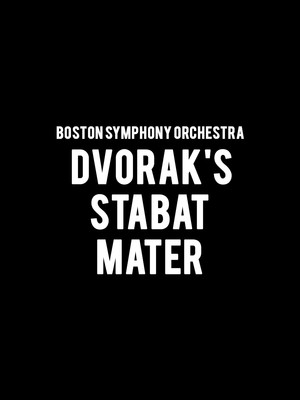 Given its length and the understandable prevailing sadness of the music, perhaps it's not surprising that performances are relatively rare but it nevertheless contains moments of ravishing beauty

In the latter months on 1875, a 35 year-old Antonin Dvorak suffered a great tragedy, the passing of his new born daughter Josefa. Six months later, the then-little known composer put pen to paper and composed the soaring cantata the Stabat Mater, a work without commission written completely for himself. Using the words of the Franciscan monks' 13th century Latin poem of the title, which explored Mary's grief when her son Jesus passed, Dvorak created a profoundly moving masterpiece that takes listeners on an emotional journey through despair to spiritual healing, concluding with an optimistic finale.

Andris Nelsons and the Boston Symphony Orchestra welcome the Tanglewood Festival Chorus, as well as celebrated  soloists Rachel Willis-Sorenson, Violeta Urmana, Dmytro Popov and Ain Anger for a resplendent rendition of the 90 minute religious work, filling the hall with a symphony of angelic melodies and harmonies. The BSO has only ever performed the piece twice in its history, marking this latest performance as a rarefied, must-see event.