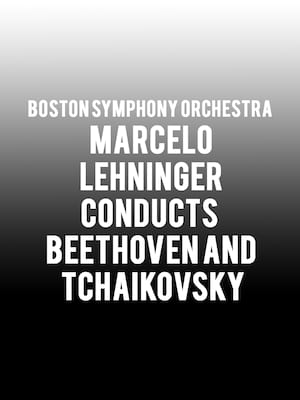 Six years since former Boston Symphony Orchestra assistant conductor Marcelo Lehninger last led the ensemble, the celebrated maestro returns for a special program of works by Beethoven and Tchaikovsky. Things set off to a rousing start with Beethoven's five minute Overture to the Creatures of Prometheus, the energetic beginning of his two-act ballet that is said to represent Prometheus' escape from heaven after stealing fire from the gods.

Lehninger's Brazilian compatriot Nelson Friere will then join the orchestra to tickle the ivories during Beethoven's iconic Piano Concerto No. 5. Known by the nickname the 'Emperor Concerto', the epic 1811 work straddles the divide between the classical and romantic periods and was to be the composer's last ever concerto. Things come to a close with Tchaikovsky's Symphony, a powerful, large-scale evocation of fate that was sadly not met with resounding acclaim when it first debuted, but became one of his most beloved pieces over time.