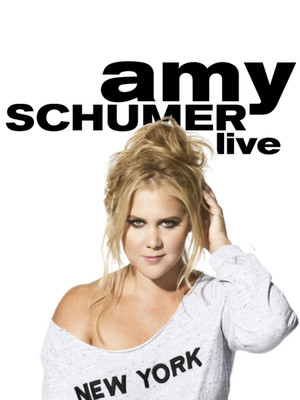 ...as soon as she opens her mouth on stage, cracking jokes about her occasionally messy sex life, the illusion of wholesomeness quickly disappears.

One of America's Finest Comedians

There's no bigger name in comedy right now than Amy Schumer. Her incredibly topical and incisive Comedy Central show has won her critical plaudits and a huge fanbase, tackling subjects like gun control, celebrity culture and feminism with style to spare. Among the show's many highlights have been an episode-length black and white parody of 12 Angry Men and her duet with Amber Rose Milk Milk Lemonade. She's also made the leap to the big screen with 2015's Trainwreck and 2018's I Feel Pretty.

Following her sold out show at Madison Square Garden (she was the first female comedian ever to sell out the venue) and the recent airing of Inside Amy Schumer season four, she's hitting the road on a massive world tour. Catch her when she takes to the stage near you soon!

She's taken her shtick to a new level. She brought it to a crescendo... more

Sound good to you? Share this page on social media and let your friends know about Amy Schumer at Chevalier Theatre.