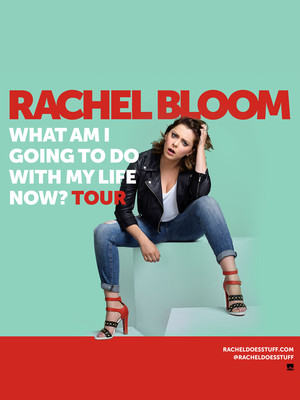 What Am I Going To Do With My Life Now tour

Finding global fame with her hilariously funny CW show Crazy Ex-Girlfriend, Golden Globe winner Rachel Bloom hits the road in 2019 with her What Am I Going To Do With My Life Now tour! In this exclusive set of dates, the rising star will perform some of the songs from the Golden Globe and Emmy award-winning comedy as well some of her original stand-up material!

Before Crazy Ex-Girlfriend hit the screens of Americans in 2015, Bloom had already hit the headlines once before with her 2010 comedy-song ''F**k Me,  Ray Bradbury" which took the internet by storm and was nominated for a Hugo Award. The young actress then became an intern to Seth Meyers at Saturday Night Live before releasing her debut comedy album, "Please Love Me". This first release featured 14 original comedy songs including the Web Award-winning single "You Can Touch My Boobies".

A performer who isn't scared to push the boundaries, Rachel Bloom, is one of the freshest and innovative comedians on the circuit, don't miss your chance to see her live on tour!

Sound good to you? Share this page on social media and let your friends know about Rachel Bloom at Chevalier Theatre.