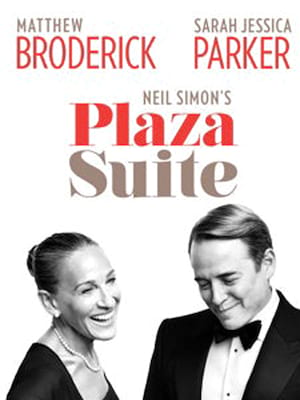 Megastars Sarah Jessica Parker and Matthew Broderick join theatrical forces as they head to Boston in Neil Simon's classic play, Plaza Suite. Directed by John Benjamin Hickey the real-life husband and wife team perform as three separate couples in this rarely revived comedy. After a run here in Boston in February, the production is scheduled to light up Broadway from March 13, 2020.

First debuting on Broadway in 1968, Plaza Suitee played an unprecedented 1097 performances and starred two of the time's biggest screen actors (much like this 2020 revival), George C. Scott and Maureen Stapleton as the lovers. In three separate acts Plaza Suite focuses on three couples as they navigate love and life in Suite 719 of the Plaza Hotel.

This will be the second time that Sarah Jessica Parker and Matthew Broderick have starred alongside one another on stage. They last appeared together in the 1995 Broadway revival of How To Succeed In Business Without Really Trying.

Broderick recently starred on the West End stage in Kenneth Lonergan's The Starry Messenger and is well acquainted with Simon's work, having received his first of two Tony awards in the playwright's Brighton Beach Memoirs.

Although best known for her featured role as Carrie in TV juggernaut Sex and the City, Sarah Jessica Parker is an accomplished stage actress. Her previous stage credits including the original Broadway cast of Annie (1977), The Innocents (1976) and Off Broadway's Sylvia (1995), plus many others.

Sound good to you? Share this page on social media and let your friends know about Plaza Suite at Emerson Colonial Theater.