Sorry! You missed Flying Lotus at House of Blues 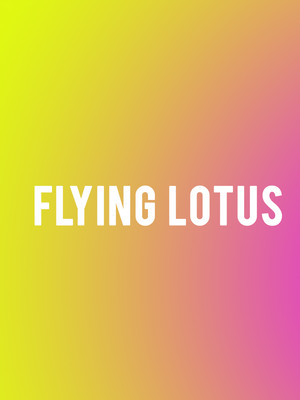 The music was more than backed up by the visuals in a perfect marriage that had people scratching their heads at one minute, wide-eyed the next, and dancing their asses off five minutes later

Californian DJ, producer, musician and film-maker Flying Lotus is known for his experimental work. Constantly pushing the boundaries of creative expression Flying Lotus is the most exciting artist on the circuit. And his live tours don't disappoint, with his visual and musical talents given free-reign to entertain and impress his fans!

Steve Ellison a.k.a Flying Lotus has also featured on a wide range of different projects other than just his own music making. Between 2006 and 2007 Flying Lotus worked on and with Cartoon Network's adult alt comedy channel, Adult Swim as well as being featured as part of the Red Bull Music Academy where he secured his first record deal with Warp records.

Flying Lotus' constant exploring has allowed him to become a key figure in the US music industry, known for his impressive and immersive shows audiences will certainly feel as explorative and inspired as Lotus himself.

Some venues may have age restrictions, please check with venue.

J-Ronny-D-Damn: “3 hours of opening acts? And none of them are Thundercat?”

We got there at 7 thinking the "show" (Flying Lotus 3D) was starting at... more

No, no, no. Pbdy, Salami Rose? and SpaceTalkers? each came with a unique... more

Sound good to you? Share this page on social media and let your friends know about Flying Lotus at House of Blues.