Sorry! You missed Snoop Dogg at House of Blues

You can catch Snoop Dogg at The Fillmore in Detroit, showing Jan 26, 2020

Snoop Dogg is also touring to: 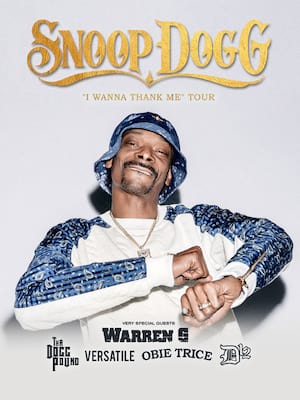 Snoop Dogg takes his rhythmically-complex lyrical delivery on the road once again!

SNOOP RETURNS WITH 'I WANNA THANK ME'!

Along with the release of his 2019 album, 'I Wanna Thank Me', Snoop is back at venues across the country in 2020. The TV personality, rapper and cooking host is set to entertain you and his fans across the country. The line-ups include Warren G, a collaborator of Snoop's and many other up-and-coming artists. Fans of Snoop will see a lot of familiar faces!

Born Calvin Broadus, Snoop has been dropping it like it's hot since the early 90s when he hooked up with Dr. Dre to work on a film theme, with his debut album following shortly after. In this three-decade career, he's released over 12 studio albums, collaborated on countless others, and won more music industry awards than you could count on your hands and toes. Don't miss a chance to catch this formidable artist live on-stage!

Sound good to you? Share this page on social media and let your friends know about Snoop Dogg at House of Blues.