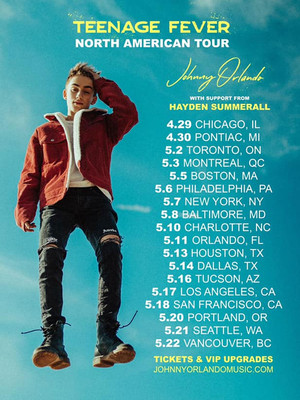 At the age of just thirteen years old, Johnny has already racked up over 200 million views on his YouTube channel, along with upwards of 877,000 subscribers. His social channels also boast 842,000 Facebook fans, 215,000 Twitter followers, and a whopping

Beginning his musical journey at the tender age of eight in 2011, Canadian singing sensation Johnny Orlando would cover pop tunes by the likes of Justin Bieber, Rihanna and Austin Mahone with his big sister Darian. Quickly amassing a fervent following, he graduated to original artist with the release of early singles/videos Replay, Found My Girl, Never Give Up and Summertime.

Just eight years later, Orlando has been doing some growing up, both in life and in his music, culminating in the release of his debut EP Teenage Fever. Blending an older-than-his-years confidence with a bubblegum charisma, danceable electronica and hip-hop-tinged beats, the hotly anticipated album features songwriting collaborations with Darian, Zara Larsson hitmaker Linne Sodahl and Jessie Reyez writer Matthew Burnett amongst others.

Sound good to you? Share this page on social media and let your friends know about Johnny Orlando at Paradise Rock Club.