You can catch Sepultura at Kennys Alley in Atlanta, showing Mar 26, 2021

Sepultura is also touring to:

You are viewing a past performance of Sepultura

You can catch Sepultura at the Big Night Live, showing March 20, 2021 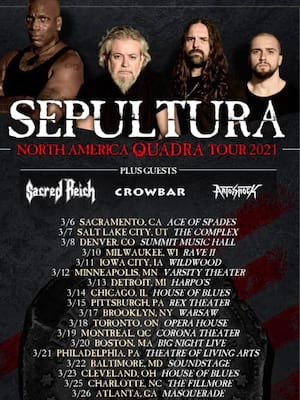 The band has now amassed 30 years of ripping riffs and jungle percussion to stand on, as well as three generations of loyal fanfare to act as the lifeblood who swarm in attendance at their shows.

Alongside thrash, groove, and death metal pioneers Pantera, Machine Head and Testament, Brazilian heavy metal icons Sepultura have taken their place as one of the metal genre's most influential acts. Over three decades after the release of their debut album Morbid Visions, the hard-rocking outfit hits the road to support the 2020 release of their 15th studio album Quadra. With support from Sacred Reich, Crowbar and Art of Shock, the quintet will spend a month in North America bringing their new tunes to the masses.

Seen Sepultura? Loved it? Hated it?

Sound good to you? Share this page on social media and let your friends know about Sepultura at Paradise Rock Club.