Sorry! You missed The Darkness at Royale Boston 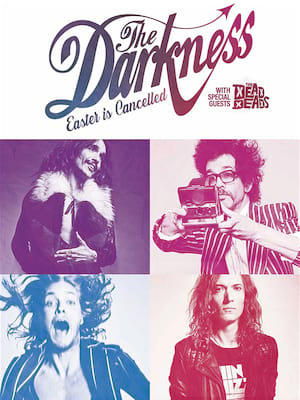 If you don't sing along to Get Your Hands Off My Woman while alone, in your car, or in the shower, then it's official: you have no joy in you

Why See The Darkness?

Dust off your catsuits and get ready to rock! The English glam-rock quartet are back with a brand new album, hitting US shores on the Easter is Cancelled trek supporting their concept album of the same name. After a stratospheric rise in the early 2000s, a feud between founding members and brothers Justin and Dan Hawkins threatened to silence their axes forever, but the band triumphantly reformed in 2011 much to the delight of fans everywhere.

Released in late 2018, their new album finds the famous purveyors of tongue-in-cheek glam metal on fine form, as sarcastic as ever and with a bone to pick with the ridiculousness of the world. Known for layering their rollicking rock anthems with delicately crafted satirical subject matter and lyrics, the throwback outfit channels the likes of Led Zeppelin and Deep Purple on stage using Justin's considerable vocal range, flaming licks plucked from the halls of Valhalla and a little black magic. They'll be playing the album in full, alongside hits and fan favorites.

Sound good to you? Share this page on social media and let your friends know about The Darkness at Royale Boston.