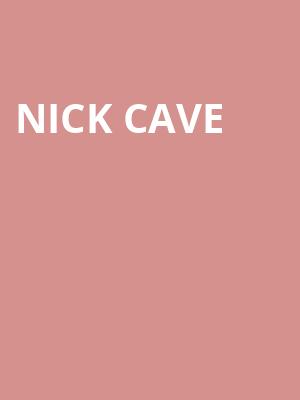 I thought that a direct conversation with the audience might be valuable. The audience can ask me anything and I'll do my best to answer.

Existing at the cross section between revered rock god, mythological poet and searing intellectual mind, Nick Cave has created subversively sublime melancholy under various guises since his post-punk debut as frontman of the Birthday Party in the 70s. Fresh off the back of the 2019 album Ghosteen, Nick Cave is joined by longtime bandmate Warren Ellis as they hit the road in support of their collaborative release, Carnage. The Prince of Darkness is inviting audience members to glimpse the inner workings of their unorthodox minds during a 17-date run kicking off in Spring.

With his mad genius extending beyond the realms of rock music to include novels, films, acting and film score composing, the modern renaissance man's relationship with his audience has evolved just as much as his relationship with his art. On tour in 2017, Cave became increasingly aware that his shows had become communal events, inspiring him to explore the open bond between himself and his fans further with this special "So, What Do You Want To Know?" series.

Sound good to you? Share this page on social media and let your friends know about Nick Cave at Wang Theater.