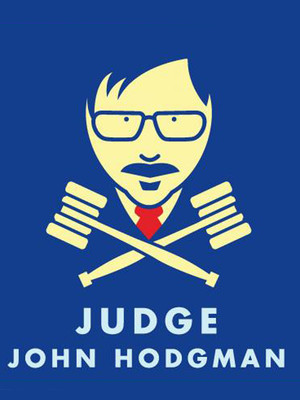 One of America's nimblest comic minds brings his hit podcast to you!

John Hodgman brings his virtual courtroom to you live as he takes his hit podcast, Judge John Hodgman, out on the road in a tour that is sure to leave you laughing all the way home. Presiding over some of life's biggest debates, 'Is chilli a soup or a stew?' 'When is someone else's leftover Chinese food legally considered abandoned?' to name but a few, John Hodgman invites you to join him as you really get to the bottom of things.

Best known for his portrayal of the outdated and stuffy PC in Apple's Apple's Mac vs PC ad campaign, John Hodgman delights in sending up his bookish persona. First coming to real prominence as a resident expert on Jon Stewart's Daily Show, he's since gone onto become one of the most intelligent and eloquent comic minds in America, always focusing his attention on more unusual material. For instance, his 2013 comedy special for Netflix, Ragnarok, was a survival guide for the end of the world.

Sound good to you? Share this page on social media and let your friends know about John Hodgman at Wilbur Theater.