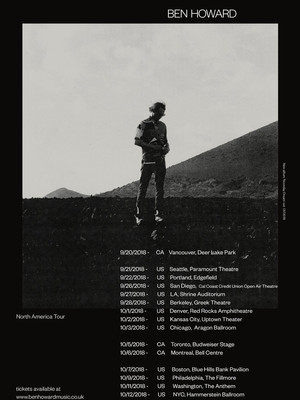 British folk idol is touring in support of his new record

Only love for Ben Howard

British folk sensation Ben Howard is embarking on a lengthy US tour to promote his brand new record, Noonday Dream. It comes after his highly acclaimed second album, I Forget Where We Were, which revealed a more introspective side to the singer songwriter after his sunny debut. Released in 2011, his debut Every Kingdom firmly established Howard as a key player in the recent folk revival alongside greats like Mumford and Sons, and the Lumineers.

With husky vocals and intricate guitar picking, Howard's songs are full of warmth and sunny surfing vibes, like his best known number Keep Your Head Up. Howard is far from a one trick-pony though, and after the achingly-beautiful melancholy of I Forget Where We Were, who knows where this new material will take us and new parts of himself he will open up for his fans.

Sound good to you? Share this page on social media and let your friends know about Ben Howard at Blue Hills Bank Pavilion.