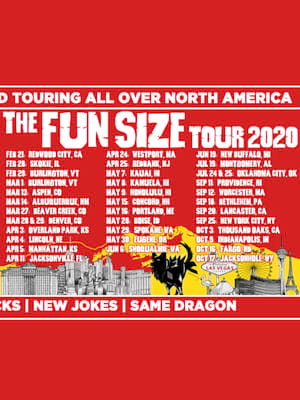 The final card routine is the sort of thing that shows why he's a Magic Circle Award-winning conjurer.

Why See Piff The Magic Dragon?

Piff on the road

British magic and comedy act Piff The Magic Dragon is on a mammoth tour of the USA and Canada this year with brand new routines and magic tricks that will leave you both amazed and in stitches. The deadpan comic dressed in a dragon jumpsuit wows audiences on the regular in Las Vegas, holding a residency at The Flamingo since 2015 - don't miss the chance to see him on the road elsewhere!

Beginning his career as Piff in 2008, the comedian and magician (real name John Van Der Put) gained success in the UK after award-winning runs at London's Soho Theater and the Edinburgh Fringe. First coming to the attention of US audiences when he appeared on America's Got Talent in 2015, he has since become a huge hit in Las Vegas and regularly returns to AGT as a guest performer.

Seen Piff The Magic Dragon? Loved it? Hated it?

Sound good to you? Share this page on social media and let your friends know about Piff The Magic Dragon at Capitol Center for the Arts.