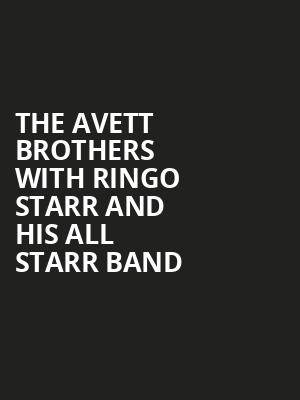 The Avett Brothers with Ringo Starr and His All Starr Band

Peace, love and rock 'n' roll, Ringo Starr is back on stage!

Why See The Avett Brothers with Ringo Starr and His All Starr Band?

Modern folk-rock meets nostalgic rock pop when Grammy Award-nominated collective The Avett Brothers share the stage with living legend Ringo Starr and his All Starr Band for two special co-headline shows in the summer of 2021. Hailing from Concord, North Carolina, the Avett Brothers fuse bluegrass and traditional Americana with the freewheeling spirit of rock and roll. Their latest album Closer Than Together soars with blood harmonies and anthemic grooves.

Needing little introduction, Fab Four icon Ringo Starr has been one of the world's brightest musical luminaries ever since his time with the Beatles in the early 60s. He has enjoyed a successful and dynamic solo career as a singer, songwriter and drummer, an active musical collaborator, and as an actor. In 2015 he was inducted into the Rock and Roll Hall of Fame.

Sound good to you? Share this page on social media and let your friends know about The Avett Brothers with Ringo Starr and His All Starr Band at Wang Theater.