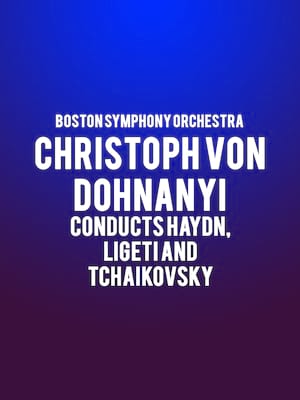 Christoph von Dohnanyi can really energise a score, and he brought great vitality to the orchestra

Widely regarded as one of the most pre-eminent baton-wielders in the classical music scene, German conductor Christoph Von Dohnyani has lead the Cleveland Orchestra during an astonishing 20-year tenure as the ensemble's Music Director Laureate. Five years after his last guest appearance with the Boston Symphony, Von Dohnyani returns during a program of Haydn, Ligeti, and Tchaikovksy.

The evening begins with Haydn's charming Symphony No. 12, a short and sweet work that has never been performed by the BSO before. This is followed by Ligeti's woodwind-dominant Double Concerto for Flute, Oboe, and Orchestra. Principal flutist Elizabeth Rowe and obe John Ferrillo take center stage during the atmospheric, almost amorphic piece. The evening comes to a close with Tchaikovksy's last ever work Symphony No. 6, Pathetique. A defining symphony of the romantic period, its exquisite rising motifs, tonal vibrancy, and triumphant finale make up one of the composer's greatest works.