Sorry! You missed Chase Rice at House of Blues 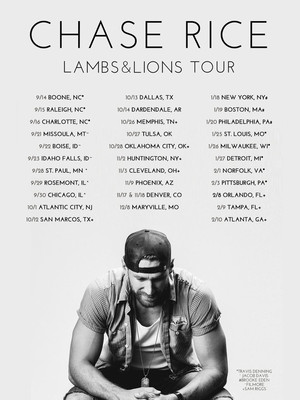 The bro-country star rolls into town

He's back with his Lambs & Lions tour

Fire up the pick-up and let the good times roll because Chase Rice is back on the road! This time he's touring the Lambs & Lions tour.

Rice first came into the public eye as a contestant on Survivor: Nicaragua, negotiating the reality show's pitfalls to make it into the final three. Music was always his abiding passion though, and he first grabbed Country's attention when he co-wrote Florida Georgia Line's smash hit 'Cruise' back in 2012. Two albums, and a supporting slot on Kenny Chesney's mammoth Big Revival Tour later, Rice is now one of the so-called 'bro-country' genre's biggest names.

The moment Chase and his team hit the stage they rocked the house at the... more

Sound good to you? Share this page on social media and let your friends know about Chase Rice at House of Blues.