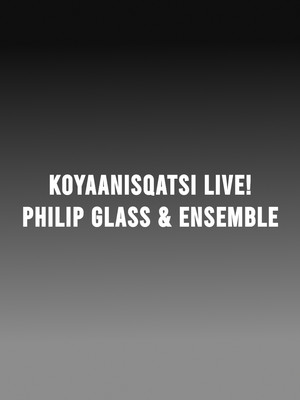 One of the most popular and prolific composers alive

A haunting live score to a revolutionary film

1982's groundbreaking experimental film Koyaanisqatsi is brought to life in the most stunning way this September, with a screening featuring Philip Glass & Ensemble performing his haunting soundtrack live to picture. The Godfrey Reggio-directed masterpiece is a wordless journey exploring the juxtaposition of modern urbanisation with the beauty of the natural world which is slowly being left behind.

Consisting primarily of slow-motion and timelapse footage, Koyaanisqatsi was the first of a critically acclaimed trilogy depicting the influence of humanity on the earth using only visuals. Glass' score for the film was distinctively memorable, a sprawling minimalist work featuring synthesizers, deep male voice chanting and horns. To witness this live will be a truly unforgettable experience.

Sound good to you? Share this page on social media and let your friends know about Koyaanisqatsi Live! Performed by Philip Glass & Ensemble at Orpheum Theater.