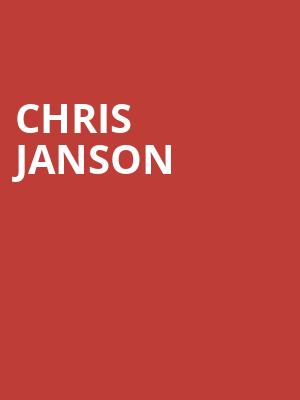 Real Friends is a fun record. It's rocking, catchy and offers something for everyone.

Born and raised in Missouri, singer-songwriter Chris Janson finished up high school then relocated to Nashville to pursue a career in country music. Luckily for the youngster, the gamble paid off and it wasn't long before he was writing for the likes of Tim McGraw and Guns N' Roses founders Duff McKagan and Izzy Stradlin. In 2010 he released his debut single Til A Woman Comes Along, and a decade later he's got three albums, four top ten solo hits, a grand old opry membership and credits on tracks written for Tim McGraw, LoCasg and Randy Houser under his belt.

Hitting the road in support of his latest album Real Friends, Janson brings his trademark high-octane performance style to venues across North America in early 2020. Connecting directly with his audiences, he imbues each show with a down-to-earth authenticity, then ups the ante with a quirky swagger and a signature silly dance move (which he regularly teaches the crowd), encouraging everyone to let loose and have a good time.

Sound good to you? Share this page on social media and let your friends know about Chris Janson at Cape Cod Melody Tent.