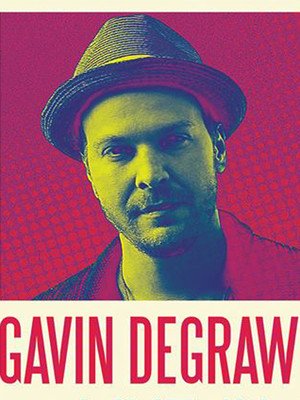 The pop heartthrob on tour

Grammy nominee Gavin DeGraw is a singer-songwriter best known for the smash hit 'I Don't Want To Be', instantly recognizable as the One Tree Hill theme tune. Last year saw him hitting the road on his Raw Tour, where he performed his entire catalog in its truest form for the first time, this year sees him treating you to his powerhouse vocals and show-stopping hits once again!

At the tender age of eight, indie-rock-pop crooner DeGraw learned to write at a piano, taking his considerable talents to the Berklee School of Music before setting his sights on New York City. Creating a significant buzz with his live shows, it wasn't long before DeGraw was signed to a major label and taking on the world's stages. He's now recognized as one of the country's finest exponents of mature, instantly catchy pop, on hit singles like 'Not Over You', 'Make A Move' and 'I Don't Want To Be'.

Sound good to you? Share this page on social media and let your friends know about Gavin DeGraw at Cape Cod Melody Tent.