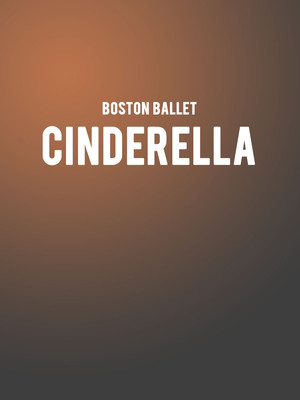 You shall go to the ball!

The Enchanting Story of Cinderella

An evening sure to delight audiences with its whimsical elegance, Sir Frederick Ashton's Cinderella returns to Boston Ballet after a successful premiere in 2014. The production, which is regarded as on of Ashton's greatest works, will be split into three acts to a score by the legendary Sergei Prokofiev and features all the enchantment of the well-known fairytale with modern touches.

One plucky housemaid's determined belief in happiness beyond drudgery and the transforming power of love allow her to break free; the story is daringly re-imagined for a contemporary audience and Cinderella's two spine-tingling stepsisters take on a comedic approach.

Will Ashton keep tradition with men performing the role of the stepsisters? A role Ashton himself danced.

2 hours and 25 minutes with 2 intermissions

Sound good to you? Share this page on social media and let your friends know about Boston Ballet - Cinderella at Citizens Bank Opera House.