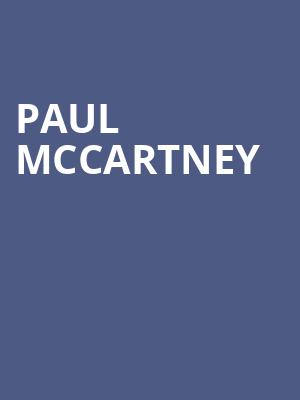 Join the former Beatles star and king of classic British rock on his latest US tour!

Living legend, Sir Paul McCartney is hitting the road for the first time since his 2019 Freshen Up Tour. The aptly named 'Got Back' tour will see McCartney trekking across the US for 13 dates. The Beatle will be hitting arenas and stadiums with the party wrapping up just two days before his 80th birthday!

In December 2020, McCartney released another album - but this one is slightly different from the ones in his gigantic catalog. Only a certain few get to call themselves McCartney albums and this surprise third entry became McCartney III - a series which began in 1970 when he released his solo debut McCartney, followed by McCartney II in 1980.

With a musical career spanning over 60-years and including countless industry awards, Sir Paul McCartney is one of the most iconic musicians of our time. An accomplished songwriter, bass player, activist and producer. His achievements cross musical, cultural and philanthropic spheres and help give him such wide-reaching appeal as a musician and human-being.

Since parting ways with The Beatles in the 1970s, McCartney has focused on developing his solo career as well as collaborated with the likes of Stevie Wonder, Michael Jackson and the Royal Liverpool Philharmonic Society. His last solo album, New, was released in late 2013 and was yet another worthy addition to the man's luminous catalogue. His concerts will be packed full of his usual mix of solo material, tracks from his time with Wings and of course, the best of the Fab Four.

I have seen Paul three times now. Every time was different and unique.... more

Sound good to you? Share this page on social media and let your friends know about Paul McCartney at Fenway Park.