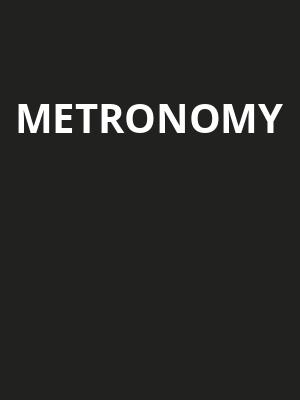 There's only one way to say it: Metronomy are just a really cool live band. They never disappoint.

British electronic-indie group Metronomy is finally returning to the road, with the North American leg beginning this fall. Led by singles 'It's Good To Be Back' and ' Things Will Be Better', expect to be treated to their latest record, 2022's Small World, another glorious addition to their repertoire, full of indie-pop beats and twinkling lyricism.

Beginning in 1999 as the solo project of frontman Joseph Mount, Metronomy eventually expanded into the 5-piece outfit they are today, with a unique sound mixing elements of electronic, pop, and indie music gaining international critical acclaim. Across 7 studio albums, Metronomy have become one of the most influential current bands of their genre, with a nomination for the Mercury Prize in 2011 and previous tours alongside Coldplay, Azelia Banks, and Bloc Party.

Sound good to you? Share this page on social media and let your friends know about Metronomy at House of Blues.