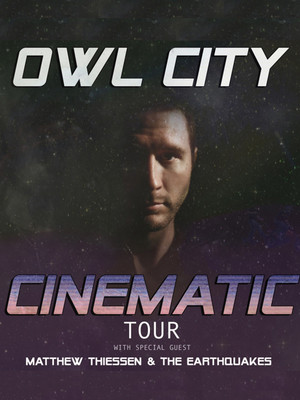 Owl City is a project of Adam Young. Formed early 2007 in Owatonna, Minnesota, United States. Owl City has reached the "Top Unsigned Artist" position on Myspace, having over 10 million total plays. His best known track is 2009's "Fireflies" from the album "Ocean Eyes", which in October 2009 hit #1 on the Billboard Hot 100 and #1 in the UK Top 40 on January 24th 2010. This year sees him hitting the road in support of his upcoming sixth full-length album, Cinematic, which is slated for released June 1.

The 24 date trek across North America kicks off in Milwaukee, and sees Owl City bring news music to fans across the country.

Supporting Owl City on all dates is fellow collaborator and friend Thiessen & The Earthquakes.

Sound good to you? Share this page on social media and let your friends know about Owl City at Paradise Rock Club.