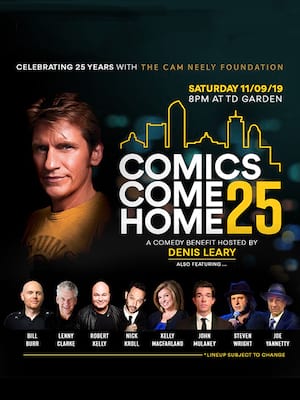 25 years of celebrating and fundraising!

America's longest-running comedy benefit returns for its 25th year, bringing you some of Boston's greatest stand up in aid of the Cam Neely Foundation for Cancer Care. Leary will deliver an act of comedy genius, followed by a lineup of returning and fresh faces Robert Kelly, Bill Burr, Nick Kroll and many more!

Over the last two decades, Comics Come Home has raised over $6 million for cancer patients and their families, by calling home Massachusetts' famous sons and daughters (and those who got their start in Boston's comedy scene) for this one night only gala. So get ready to laugh!

Best one I been to so far great tribute to Cam and Red Sox. Leafy is... more

Sound good to you? Share this page on social media and let your friends know about Comics Come Home at TD Garden.