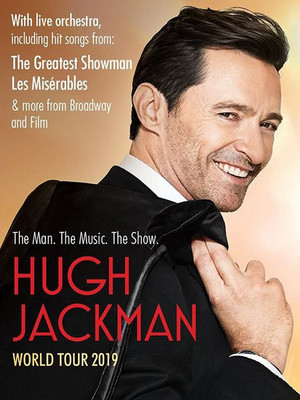 Sweet-voiced musical star to some, claw-sprouting mutant to others, there's really nothing Hugh Jackman can't do. Now he's taking to the road in his new one man show The Man. The Music. The Show. He'll be performing songs from throughout his illustrious career, from both his time on stage and screen, so expect to hear your faves from The Greatest Showman, Oklahoma!, and Les Miserables, all backed by a live orchestra.

Hugh began his career in theatre in his native Australia, before making the leap to London in 1998 with the National Theatre production of Oklahoma! Two years later and he got his big break in Hollywood, starring as Wolverine in the first X-Men movie, a role he would portray a further eight times. Since then he's been one of the most in demand actors in the world, picking up a Tony for The Boy from Oz, and a Golden Globe for Les Miserables. In 2017 he led The Greatest Showman, featuring songs from Dear Evan Hansen's songwriting duo Pasek and Paul, which became one of the most successful movie musicals of all time.

He sings, dances (tap-dances too) his way into our hearts!

What a man! What a Show! The opening belter of The Greatest Show, the theme tune from The Greatest Showman immediately lifts the audience to their feet, clapping and singing along and believing that this might possibly be the greatest show.

If you like music, dancing and watching a great looking guy do these things,... more

Sound good to you? Share this page on social media and let your friends know about Hugh Jackman at TD Garden.