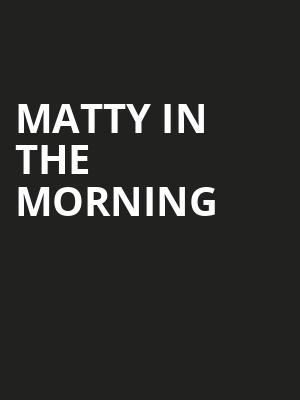 Photo by Tim Foster on Unsplash

Matty in the Morning

He thinks Tom Brady is odd, hates Donald Trump, and after 37 years, Matty in the Morning is still the king of Boston radio, with no plans to give up the throne anytime soon

Why See Matty in the Morning?

An Evening In Conversation With Local Hero Matt Siegel

Since 1981, local legend Matt Siegel has kept listeners entertained and informed on the Matty In The Morning show on KISS 108. The station's highest-rated show (and most celebrated radio host) has kept fans coming back every segment thanks to a delightful mix of insightful interviews and Matt's undeniable charisma, as well as his off-the-wall humor and sarcastic commentary. Don't miss a chance to spend an exciting evening in conversation with the ratings-ruling radio king at Boston's historic Wilbur Theatre once more!

Many Bostonians think of Matt as a long-time friend, one who's accompanied them on their early morning commutes for most of their lives. Discussing family and his personal life, his brash persona positions him as a crotchety uncle of sorts, albeit one who knows how to tell one heck of a good story. Outside of Beantown, Matt has been recognized twice for his considerable contributions, winning the highest honor in radio - the coveted National Association of Broadcaster's Marconi Award for Personality of the Year - not once but twice in 2001 and 2009.

With all the hype for this show, my expectations, unfortunately, were... more

Don't waste your money.. it wasn't great at all, Christine Hurly was hilarious,... more

Sound good to you? Share this page on social media and let your friends know about Matty in the Morning at Wilbur Theater.